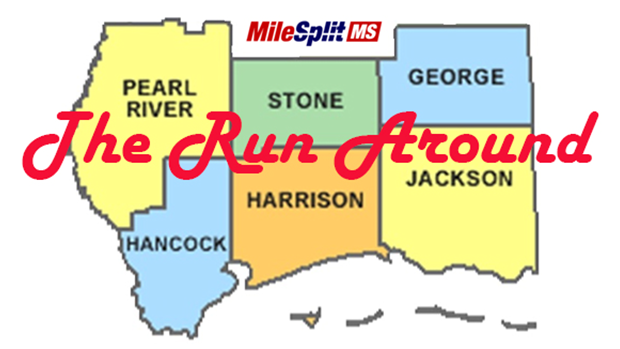 Hey Y'all, it's Coach Daigle here to give you The Run Around.  Today I'll look at 2A, 4A, and 6A who all run on Monday at Choctaw Trails.   I'll look at the coast area teams, highlight the top individuals from each team, as well as give you some predictions

Since Our Lady Academy, OLA, is all girls the St. Patrick Irish are the only girls team in 2A in the bottom six.  And they are good.  They are led by Senior Jordan Pete and the virtual meet has them winning a state title.  Jordan trained with my AAU team this summer and she is the real deal.  In addition to running with or ahead of most of my boys this summer, she also is well rounded and excels in the classroom.  You may even see her taking pictures for yearbook after she runs her race.  She'll be helped by Isabel Leatherman and the rest of the Irish.

On the girls' side of the action I think it will go St. Patrick, Clarkdale, and East Union - that's a slight variation from the computer too.

The boys 2A race has defending State Champion St. Patrick in it.  They lost a few key folks to graduation but the virtual meet still has them finishing 3rd, closely behind West Lincoln High School.  They are led by Cade Meyers and Dylan Middleton.  Meyers has run 17:44.79 and Middleton has clocked 18:01.10.  Those two are joined by one other Irishman under 19:00.0:  Dominic Patino.

Look for the Irish to finish second overall behind Walnut with West Lincoln finishing third.

The East Central girls are led by Lauren Brown.  She leads the state in 4A this year as well with a time of 20:27.30.  Her squad looks to finish 15th overall according to the virtual meet.

The East Central boys are tough.  I should know, I run against them a lot.  They were State Runners-Up last year and look to be one of 4 or 5 teams I think could win it all.  Those teams are EC, Corinth, Pontotoc, Ripley, and Saint Stanislaus.  I'm obviously biased but my hat is truly off to this EC team and their coach, Jason Law.  They are led by Christian Balcer who has the second fastest time in 4A this year: 17:05.21.  He's the real deal and he's got help.  Adam Taylor has run 17:41.77 this season and Adam Atigh has a SB of 18:13.79.  Grayson Ard and Preston Lee round out their top five.  I think they'll get on the podium again this year.

"The Pass" Girls are led by Coach Breanna Halley and they are tough this year.  A virtual meet says the finish as State Runner-Up and I would love that or better for Coach Bre and her girls.  They are led on the course by Haley Clark who has a SB time of 20:42.00.  Kealey Skinner, Avery Saulter, Madelyn Greene, and Draevyn Snabazz round out the Lady Pirate top 5.

The computer has Pass' boys finishing 8th, and they've hung around in the top ten all year.  They are led by Mike Seignious who is looking to earn All-State Honors as well as finish in the top ten.  The Pirates have one more athlete under 19 minutes - an important threshold.  That is Sean Necaise.  The rest of their top 5 all have SB's under 20 minutes.

The Poplarville Girls are ranked 9th by the computer going into the state meet.  Evelyn Kimball leads her team with a time of 22:01.94.  I'm sure she'd like to PR and see if she can't get into the top ten individually.

The boys from Poplarville are ranked 24th in the computer.  Their lead runner is Seth Santiago with a time of 21:10.60.  The squad looks young but we are hoping for PR's all around for the Hornets.

The girls from Vancleave are picked 13th in a virtual meet.  Their top runner, Katelyn Posey, has a SB of 23:42.55.  I like these girls for their sportsmanship and work ethic, they clearly learn that from their coach.  I'm hoping they can get some help and run well and get in the top 10.

Vancleave's boys are led by William Wilson with a SB of 19:43.00.  He and his teammates are ranked 23rd in a virtual meet.

My squad is focused and peaking at the right time.  We've been third the last two years and would really like to improve on that and come home with some hardware and hang a banner in the Brother Peter Gym.  My 3 captains lead the way - Landry Lemoine, Kyle Capo, and Alex Koons. Their season bests are 18:30.8, 18:42.57, and 18:53.93 respectively.  Freshman Keegan Leverett and Junior Carston Raymond round out the top 5 for the Rocks.  I know I'm biased - but we are poised and I think we have a legitimate shot to win it all.  I'll be disappointed with anything less than State Runner-Up

The Biloxi girls are led on the course by Madison Walker with a time of 20:09.00 and are projected 5th overall in a virtual meet.  Jazmin Lewis is their number two and the girls have been solid all season.  I'm hoping for PR's all around for the Biloxi squad and if they get some help the may just threaten the podium.

D'Iberville is led by Senior Gracie Ferguson on the girls side.  She's recently committed to South Alabama and has a SB this year of 19:43.00.  The squad looks to finish 15th overall in a virtual meet.

In a virtual meet, the George County girls rank 18th in 4A.  Lexi Green is their number 1 runner and Amber Goldman is their number two.  Their times are 22:39.00 and 24:03.00 respectively.  Look for these two and their squad to be ready - they've got the best course around to train on.

The GC Boys show up at number 22 in the virtual meet.  Kevin Cooley is way out in front of his teammates with a 17:42.59.  Coach Pater's son, Jayce Pater, is their number 2, he's got a SB of 21:06.10.  Coach Pater and his crew hosted the Division Meet for us and then turned around and hosted a second work meet.  Their course is great and most say it's harder than the Choctaw Trails.  Thanks again Coach Pater and crew.

The Gulfport boys come in at number 24 in the virtual meet.  Andre Gillispie leads the Admirals and he has a SB of 19:19.51.  Good Luck Admirals!

Hancock's girls rank 23rd on the virtual meet.  Their top runner is junior Diona Siggers who has a PR of 24:31.43.  She's steadily been getting better as the season progresses, let's hope she can lead her team and hit another PR.

The Hawks rank 20th on the boys side, and are led by Matthew Johnson at 19:02.71.  I haven't run against Hancock much this year, but I'm sure the boys would love a top 20 finish at state.

The Red Rebels are thin on the boys' side.  It looks like they only have two runners.  If that is the case they'll get a No Team Score or NTS in the record books.  The duo that is running is Stephen Ladner at 22:17 and CJ Powers at 23:49.  We wish them luck and PR's and hopefully more teammates next season.

St. Martin's girls come in at #26 on the virtual meet. Keeleigh Bilbo and Credence Carter, both freshmen, lead the way for the Lady Yellow Jackets.

The St. Martin boys are right behind Hancock in the virtual meet at #21.  Owen Skelton leads the squad with a blazing fast 17:29.69.  The problem St. Martin faces is that no one else can keep up with Owen.  Hopefully his teammates can PR along with him and maybe edge the team into the top 20.  After all, the state course is the best place to get a PR.

The Pascagoula girls find themselves on the 21st spot of the virtual meet, right behind Harrison Central.  Leandria Ruiz - an 8th grader- leads the pack of 'Goula runners.  If they can all PR, they may be able to improve on this 21st ranking.

The Pascagoula Boys rank 26th in the virtual meet.  Janthony Ruiz is their best runner.  He comes in with a respectable 19:48.95 leading his team.  I'm sure the guys would love to PR to a man an sneak into the top 25, I'm hoping that happens for them.

Well, I saved the best for last...The Ocean Springs Greyhounds.  In the virtual meet the Lady Greyhounds are second by 23 points.  I see them closing that gap, however, and they are my pick for the title this year.  It may come down to the fifth runner, as it often does, in this race.  And I think Penelope Prochnow may just find what it takes to propel her team to victory.  Other members of the top 5 include Isabelle Wheeler, Sadie Smith, Amelia Prochnow, and Kate Trosclair.  Good luck Lady Greyhounds, I'm pulling for ya!