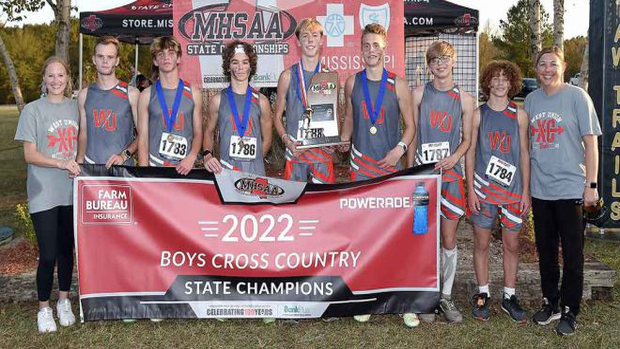 *West Union won the MHSAA 1A Boys Cross Country title on Monday, Nov. 7. It was the first time that a team other than TCPS had won an MHSAA 1A boys title since 2014

Tupelo Christian Prep School was going after their eighth consecutive MHSAA 1A boy's title, dating all the way back to 2015. Led by 2022 MHSAA 1A 1600m champion Bounds Simmons, they were considered the pre-race favorites to bring home yet another banner.

However, led by 2021 MHSAA 1A Cross Country Champion Brodie Moore, who finished runner-up in 18:09.6, West Union High School battled through scorching temperatures to place four inside the top 14 on their way to a 16-point victory over TCPS, ending their seven-year winning streak.

When asked if Moore thought he and his team were capable of such a feat, Moore responded, "No, not at all. The team and I were constantly checking the MileSplit Mississippi rankings, but never had any idea that we would be as close as we were to TCPS."

"Honestly, I didn't believe [that we had won] at first. From my perspective, it looked pretty close. But my coaches were telling me that we had won, and I, of course, was hyped." 16:03 5K runner Chandler Ray was a man on a mission, opening up very quick on a hot day at the 2022 MHSAA 1A Cross Country Championships. Simmons was the only one brave enough to go with him, but by 2K, Ray had built a sizable gap and held it all the way to the finish line, earning his first-ever MHSAA 1A championship on the grass.

MHSAA 1A Girls recap on next page >>>