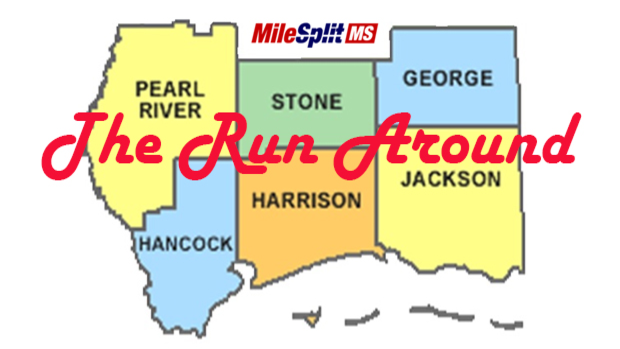 Howdy Folks, it's your favorite coach on the coast here to give you The Run Around.  Today I'm going to look at the George County Trail Run and the Wildcat XC Open.

On the boys' side, George County's Ethan Fisher took the overall win in 18:43, but Long Beach came out as the top team with a score of 78.  Pascagoula was second, and Pass Christian took 3rd on the boys' side.

Grace Brewer led the girls' race from East Central.  She won the race in 22:56.

Pascagoula won the team title with a score of 27, followed by Pass Christian in second and host George County in third. Other top finishers for the girls were:  PRC's Mia Ramsdell - 24:29, Pascagoula's Leandra Ruiz - 24:58, Pascagoula's Kenairis Villaneuva - 25:03, and Long Beach's Alexandria Cruz - 25:38.

The junior high boys and girls ran a 3200m.  East Central High School won the team title on the girls' side, followed by Saint Martin, then Pass Christian.  Alajia Green from St. Martin was the top finisher with a time of 15:32, followed by Addy Chavez from East Central, who clocked a 16:40.  Rounding out the top five were:  Harper Batten from Pass - 16:59, Natalie Moser from Picayune - 17:22, and Kylie Varnado from Picayune - 17:34.

The Wildcat XC Open was run on Saturday, Sept. 3, at the Harrison County Fairgrounds. This was my first time entering this meet, so I didn't know what to expect. It is hosted by a home school team known as the Coastal Mississippi Wildcats.  There were MHSAA, MAIS, and home school teams in attendance.

One change was that 6th graders on up had to run the 5K, so my junior high guys would be tested at the longer distance.  Teams from The Bottom Six competing were:  D'Iberville, Hancock, Harrison Central, Long Beach, Pass Christian, SSC, and West Harrison.  There was a steady light rain the whole time, and the course had been wet already from rain earlier in the day.

There were five divisions - gold was MHSAA teams mixed with a few MAIS teams.  There was a 2-mile open race, and there was the blue division.  The blue division consisted of home school teams or clubs paired with some MAIS teams.

Next was the gold division boys.  Heritage Christian Academy's Dallas Stricker led the whole way and looked strong at the finish.  He ran 17:34 on a wet and slippery course.  Pass Christian's Trae Bailey finished second, with SSC's Cameron Gremillion coming in third with a time of 20:29.  Team-wise, SSC won the day with a score of 30, followed by D'Iberville with a score of 70.  Christian Collegiate Academy finished third.

The open race was next.  This was a two-mile race for the youngsters.  HCA's Gavin Spears took the win in 13:41.  He was followed by Blayne Anderson of the Pearl River Raging Raptors in a time of 15:35.  Fiona Fox from the host team Coastal Mississippi Wildcats took third in 15:53.  Jackson Vipers' Elliot Bounds took fourth in 15:53 and Hope Academy's Avery Daley took 5th in 16:44.

Finally, we had the blue division boys.  The Hattiesburg Forerunners won the team title, followed by the Pearl River Raging Raptors and the Coastal Mississippi Wildcats in third.

As I said before, this was my first time entering this meet.  Seeing homeschool teams, MHSAA teams, and MAIS teams all compete in the same place was neat.  There are some strong runners in each of those divisions.  Other than the wet weather, it was a great meet.

So these are two recent meets from the coast.

In my next article, I'll cover the Pass Christian Invitational.  I'll also try to get interviews with some of the top runners on the coast on the site as well.

That's a wrap. See y'all on the course.