Mississippi's #1 miler, Keegan Leverett, knew how intense the field at the 2022 Mobile Challenge of Champions would be. The field was stacked with studs from all across the southern states, including the winner Alabama State Champion Mac Conwell, who won in a 4:14.40 and has gone 1:52/9:09 in the 800m/3200m.

This puts Leverett at #2 in the last decade behind only Christian Balcer, and also slots him inside of the Top-10 All-time performers list in Mississippi High School Track and Field history.

According to Leverett, the race went out faster than he wanted, but he 'stayed in there and just kept grinding until the last 200m where he pushed hard till the end.'

Chances are that Leverett will be in a very strong position to repeat his state championship titles from last year, and perhaps even go for the triple. 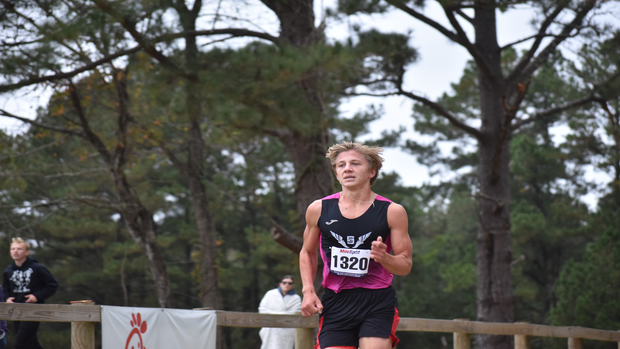 This meet featured two elite fields in the 800m run, with the girl's race known as the Kaelin Kersh High School Girls 800m run, named in memory and honor of George Kersh's daughter.

This field featured the best middle-distance girls in the state, with big-time names such as Streetman, 2 x MHSAA 6A State Champion Jessica Cartwright of Hernando, 9 x MAIS State Champion Julia Stradinger of Jackson Prep, and many others. (*Read the full field and review HERE*)

In this race, Streetman did what she always does, and that was lead from the gun. Cartwright was right on her heels, and Stradinger drafting off of them in third. After a quick opening 400m, Streetman made a gear change with 300 meters to go, with only Cartwright responding. 150 meters later, Streetman made yet another gear change, and it was that extra gear that got the Mississippi State distance signee to under 2:20 for the first time in her career, running 2:19.06 officially. This field was quite possibly the best-assembled High School Boys 800m field on Mississippi soil, and according to our records, there have never been more Mississippi high school boys break two minutes in the 800m in a singular race. This high-caliber field gave us quite possibly the most exciting distance race of the season, with six sub-2 performances and the winner being a mere 0.09 seconds in front of second place.

In that race, the Pearl High School duo of Dominic Turner and Javien Davis took it out at a smoking hot pace, coming through the 200m right around 25-26 seconds. At the 400m mark, only Turner remained, coming through in right around 54 seconds, with the chase pack led by Sidney Stegall coming through in around 57-58 seconds. Stegall looked comfortable and engaged, and began to make the correct gear changes to try and hawk down Turner. Each gear change that Stegall made, the field followed, including Senatobia's Brandon Williams and Brookhaven's Grayson Childress. With 200m to go, Williams and Childress made the pass on Stegall, and the chase pack was closing in on Turner hard. 100 meters to go, and the field bunched up, and just like that, everyone was back in it.

Williams took the lead, and Childress tried to respond. It looked like Williams would surely take it... But out of nowhere came Sidney Stegall, the 3 x MAIS State Champion, out of lane 4, lunging for the line and taking the 2022 George Kersh 800m title by the skin of his teeth.

The crowd was electric, and for good reason. It's races and atmospheres like these that are going to take Mississippi track and field to the next level in Mississippi.

This kid is dangerous, and he will be a major point-scorer for the Warriors in MHSAA 4A this postseason. While the George Kersh High School Boys 800m did take a lot of the hype in that event over the weekend, there was indeed another Mississippi stud that competed out of state in his specialty event, the 800m. That stud was none other than Clinton's Miguel Bankston, the current Miss. #1 in the 800m with his 1:55.50 mark that he ran at the 2022 D&H Relays.

Bankston put down his second sub-2 of the season, as well as the second-fastest time this year, which was a 1:56.40 at the 2022 Mobile Challenge of Champions, Invite section. Bankston finished second in a loaded field, coming in just 0.27 seconds behind 9:06 3200m runner Michael Vocke of Jesuit, and taking down some of the middle distance runners across Louisiana, Florida, and Alabama.

The first 400m for Bankston was run in a tactical 59 seconds. Bankston then made his move from 4th to 2nd and closed in 57 seconds for the second 400m, almost catching race winner Michael Vocke, a __ miler. That is a very impressive way to run 1:56, and according to Clinton High School head coach Jonathan Perkins, Bankston is mentally ready for the postseason. Personally, I think he is ready for 1:54... Long Beach senior and University of Arkansas distance signee Brooklyn Biancamano inched closer to the 5:00 barrier, running a SB of 5:10.20 converted from the full mile, placing 3rd overall at the 2022 Mobile Challenge of Champions.

The full results are below:

This was a great stepping stone for Biancamano heading into the postseason, and she is primed and ready for something quick in the coming weeks. MAIS 5A and 6A Girls Distance at the State Championships

The large school girls section of the MAIS has been wildly impressive in all events, especially the distance events.

In MAIS 5A, Columbia, East Rankin, and Simpson have elevated the game in MAIS 5A, and this is easily the highest-caliber atmosphere they have ever competed in, and it will be a seriously tough task to make the podium in the 800m-3200m in that class.

In MAIS 6A, the Jackson Prep and MRA rivalry continues, with others such as Ella Rankin of Hartfield, Kate Simms of Jackson Academy, and Makayla Smith of Presbyterian Christian School also sticking their nose in as well. Other heavy hitters such as Julia Stradinger and Sloane Vinson, younger talents such as Olivia Smith, and very young talents such as Riz McBride, who is the #5 6th-grader in the nation in the High School Girls 800m.

Each distance race in both of those classes will offer some very fun races to watch and will have the chance to make history at this year's 2022 MAIS Overall Championships. This is a topic I have touched up in previous podcasts, but the depth of MHSAA 6A North on the boy's side is absurd this season.

There will be Regional meets that are more competitive than MHSAA 6A State Meets in the past.

From 800m-3200m, they are going to have to bring their A-game to make it through each round, and I can't wait to see the monster performances that we are about to see out of these guys in the near future.