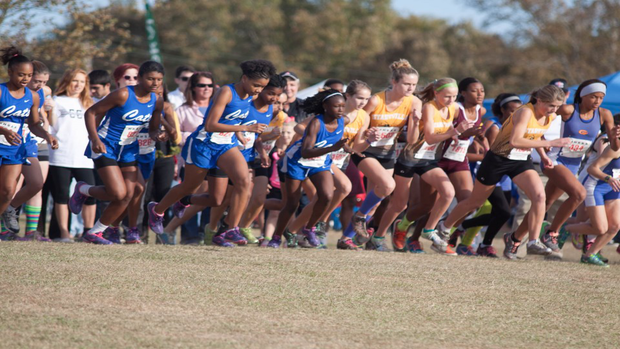 In the 3rd Edition of the Mississippi Cross Country State Meet Classics, we have the 2014 MHSAA 6A Girls State Meet, perhaps one of the most stacked fields in recent history.

2014 in MHSAA 6A was one of the many years during the reign of Starkville High School's Kate Mattox, a 7-time Mississippi Gatorade Player of the Year in Cross Country now competing at the University of Southern Mississippi. She was just coming off of a track season that included a 5:05 1600m and 10:53 3200m, as well as a 19 win streak over the past cross country and track seasons - wins that included high-caliber meets such as Brooks Memphis, Watson, the State Championships, and the Mobile Challenge of Champions. In this upcoming state championship, Mattox was going for her 5th straight title in cross country, a streak beginning at just a 7th-grader.

2014 was also the first year that the High School Girls would run a 5k at the MHSAA Cross Country State Championships. In the years prior, they had run 4k.

Earlier that year, Mattox had already had a narrow victory to in-class rival and Tupelo High School senior Christina Daniels, an 18:30 5k runner who went on to run at Loyola University-Maryland, at the MC Watson Ford Invitational. Mattox and Daniels at the 2014 MC Watson Ford Invitational

Mattox also had Madison Central HS Junior Rebecca Buteau to worry about, a very strong Jackson Metro Talent that went on to run 5:06 in the 1600m her senior year and 16:36 in the 5k running for the University of Alabama, which is who she competed for all 4 years. Daniels and Buteau had both just recently raced Mattox at her home course at the Starkville High School Invitational, a race that had also featured Morgan Claire Rose as a freshman. As a matter of fact, this may have been one of the most 'low-key' stacked high school girls' cross country invitationals in recent history.

Back to the race, the gun went off, and the trio of Mattox, Buteau, and Daniels went zooming down the starting downhill to head into the 1st-mile section of the course (Remember, this would have been the old Choctaw Trails). They were stride for stride in the 1st mile, opening up in a sub 5:45, with a huge chase pack behind them. All 3 looked to be suffering from the hot pace but kept trucking on through the trail portion of the course.

They came up on the halfway mark, and Mattix and Buteau began to slightly gap daniels - They were running well under 18:30 pace. Mattox was doing what she always did, which was pushing the pace up front. Buteau was right with Mattox, looking smooth, clicking off stride for stride with Mattox.

The team battle was also looking to be a close one. Tupelo had a huge lead through the 1st mile, but Starkville High School had 3 in the top 8 at halfway (Those 3 were the Mattox sisters), and their #4 was right with them. Ocean Springs had a very tight pack, however, and they were moving through the field and hawking runners down, one by one. The crowd was gathering at the final uphill to watch the battle between Mattox and Buteau. The lead cart emerged, and not far behind was Kate Mattox giving it everything she had as she prepared herself for the final 200-meter climb and hold off Buteau. Buteau was not far behind, kicking for Mattox up the homestretch.

Mattox leaped across the ditch, which was the 3-mile mark of the course. As she did so, Mattox almost stumbled to the ground. Mattox had been giving everything she had at a fast pace, and as a result of that, Mattox had said that her body had felt like it was shutting down. The 200-meter uphill climb surely didn't help, as the lactic acid began building up in her legs.

However, It was all 'mind over matter' for Mattox, as she powered up the home straight through the finish line, holding off a late-charging Buteau and taking her 5th straight cross country state title in 18:18 for 5k. Buteau was 2nd in 18:27, and in 3rd was Daniels in 18:44. Full Results on Next Page >>>