*Before we get started... this is by far the deepest Class in Mississippi in the deepest year Mississippi High School boys have ever seen. With that being said, there are going to be guys that could win plenty of other classes in the state, and won't be mentioned below - That's just the way MHSAA 6A stacks up this year (I love to see it!). I wish I could write a paragraph on every single hard-working kid out there, but I, unfortunately, can not. Please do not get offended if you or your team is not written about, as once again, I can only get a select few. Like always, nothing I write down is ever set in stone, and I love it when I get proved wrong, and I'm 100% sure there will be a team and / or individual that does so tomorrow* The #1 returner to the state meet, the fastest seed in MHSAA 6A this year, and the fastest MHSAA 6A finisher to cross the line at Watson, it's only natural that Oxford's Luke Johnson is definitely in the conversation for winning the title tomorrow. He's gone 15:53 this year, something that was bound to happen all year after all of his big meet wins and running sub-16:10 on 2 occasions. He is a gutsy runner who likes to take races out hard, and he always has a big last mile. One of the only guys to have beaten Johnson this year and someone, as we all know, has made some crazy gains over the summer... Another title contender for tomorrow is Jaheim Bridges of Tupelo High. Bridges, another sub-16 5k runner in this field, has been on fire this cross country season, especially on the back half of it. His last 3 races have been 2 wins, one of them beating Johnson in a course record, one was a 16:02 5k and Top 10 finish at Watson, and the other was a final tune-up before state which was a casual 16:27 outkicking teammate Taylor Brown. Bridges has some of the best leg speed in this field, and if is in it with 1k to go, he could be dangerous. The other MHSAA 6A runner that has beaten Johnson this year, and another runner who has been running out of his mind recently, the 3rd runner to keep an eye out for is Ethan Knight of Oxford, Johnson's teammate. Johnson and Knight run very well together, and I would not be surprised if these 2 take it out in the first 1k. Although Knight has definitely been around this cross country season, he burst onto the scene in a big way at Watson, hitting a huge surge at the 2-mile and broke the race apart, which resulted in a 15:57 5k, taking down many other MHSAA 6A runners in the process such as Bridges and Brown. Although it would be a pretty crazy upset if Knight took this race, definitely don't count him out, as he is figuring things out at the right time, and ran very well tactically at Watson. The winner of the deepest region in the state and someone who has been near the top of the running scene for a long time now, the 4th runner to watch out for is Grayson Edwards of NW Rankin. Edwards just had a huge kick at the 2021 Region 3-6A Championship, running a PR of 16:27 in somewhat of a tactical setting in the first half. That was his first time running Choctaw Trails all year, and I'm sure it will be even faster when he has better competition and he knows the course. Edwards is another one that could be dangerous if he is in it with 1k to go. The last runner to be previewed is the other freshman phenom from Tupelo, Taylor Brown. Brown is probably one of the most talented guys in the state. He comes into this race with a PR of 16:14, a solo effort in which he beat Bridges, and has basically consistently run in between 16:20-30 all year. He always asserts himself into the mix, and if he has the right day, Brown could away with a very big finish tomorrow.

I can't see any situation that doesn't involve these 2 teams coming away with the state title tomorrow. I don't mean any disrespect to the field, but both of these teams have some of the best lineups in the last decade on their squad. What is so intriguing about this matchup is that the 2 teams are polar opposites of each other. Oxford is very top-heavy as they have quite possibly have the best trio in the state (they have 2 sub-16's and their #3 runs 16:13), and Pearl is easily the best pack running team in the state (5 under 17 in an 11-second spread). On paper, Oxford is supposed to put 3 in the top 4. If they do anything close to that, like 3 in the top 5, Pearl would have to have a heck of a day to beat them - And I think Oxford has a very realistic shot of doing that tomorrow. However, Pearl's team performance at Watson was quite possibly one of the best pack running performances in Mississippi history, yet Oxford still beat them because they are so top-heavy.

Like I said earlier, if Oxford puts 3 in the top 4, I would think that would seal it for the Chargers, as all their 4 and 5 would have to do is simply run what they have been doing all year. And, mere seconds lowered from Oxford's 4 and 5 could help out a great deal. However, I would not at all be surprised if Pearl has another astounding team performance and do something like all 5 under 16:50. If that pack should have off 5-10 seconds, then perhaps that would seal the deal for the Pirates. It's too close to call, but I would expect a team battle for the ages tomorrow in the 6A title race. The race for the 3rd looks to be down to Tupelo, Oak Grove, Madison Central, and Ocean Springs.

The race for the individual title will be just as exciting, as Oxford has some cards to throw into that deck as well. I would say because of Luke Johnson's accolades going into this race, he is the favorite going in. Even at Pontotoc when he had somewhat of an off day, he still ran 16:19, so he will at the very least be up there. I think he will be doing much more than that though, as he seems to thrive in high-pressure situations and is really good at learning and gaining experience after each and every race. Whether he's the one doing it or he's covering it, he loves a big last mile, so expect to see him gritting his teeth up the hill in the last mile tomorrow.

Another runner who is really good at hanging on for dear life is Jaheim Bridges. At Watson, he fell off somewhat early, but stayed right there the entire race and picked guys off of the lead pack, eventually running 16:02. 'Hanging on' for a 16:02 is very impressive, and I think at the very least he'll come away with a top 3 finish. Like I said earlier though, he could be dangerous if he is in it at around half a mile to go.

Although we do have outside shots such as Edwards, Knight, and Brown who could definitely make a difference in this race, my best shot is that the title will most likely come down to either Bridges or Johnson. Don't count out Knight though, as he knows how to have a good race on this course and is bursting with confidence after his 15:57, and Edwards has been running at the top of the state level since he was a freshman, and I still stand by Brown being one of the most talented guys in the state. 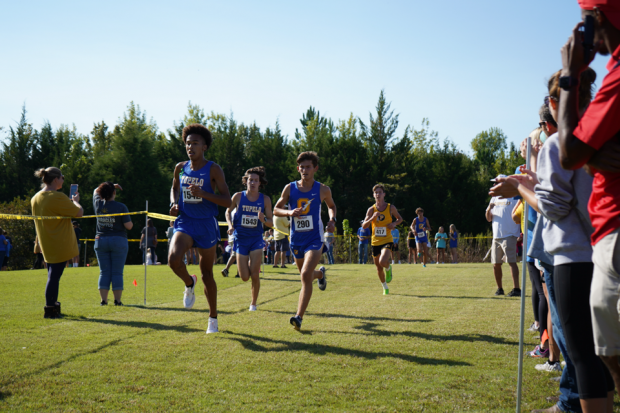 After all of that, here are my final predictions for tomorrow:

Pearl's 1-5 average will be faster than at Watson

Oxford's 1-3 average will be faster than at Watson

An Oxford runner will be leading with 1 mile to go

The last one could be a long shot, but someone will break 16 for the first time in their career.