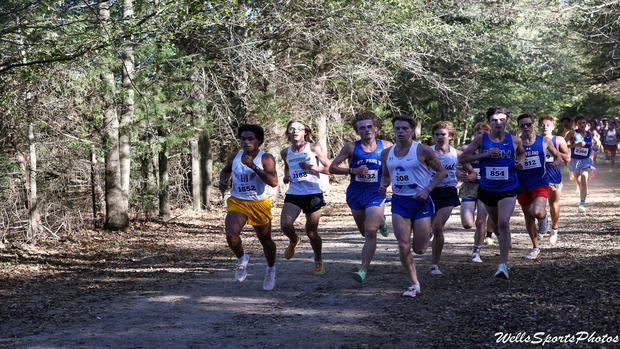 DANVILLE, Ala. --- The 2022 Jesse Owens Classic, held out-of-state in Danville, Ala. at Chickasaw Trails, was one for the record books for Mississippi male distance runners.

Last year at the 2021 Jesse Owens Classic, Brookhaven High School made history with the best individual and team performance - A sixth place finish and 5K average of 16:22, as well as Grayson Childress's 15:40.1 performance to set the course record for Mississippi athletes. At the 2022 Jesse Owens Classic, four Mississippi boys were under that record of 15:40.1, and Pearl High School cemented themselves in history as the first-ever Mississippi High School Boys team to have six athletes in the same race crack 17 minutes in the 5K.

Pearl's JaQuavion Bryant set the tone with a win in the Silver Boys Division, stopping the clock in a PR and Mississippi course record of 15:40.1. Bryant led Farren Oberto to his first-ever sub-16 5K, as Oberto ran 15:56.7 to finish fourth overall. This means the Pirates now have two sophomores on the same roster that have broken 16 minutes in the 5K, and puts Bryant and Oberto as No. 3 and 6 on the Mississippi Sophomore Boys All-time 5K list. "I thought we came out and ran well. I thought all Mississippi Teams ran well. We're just trying to build and get better each week.", expressed Chris Barnett, the head cross country coach at Pearl High School. "As far as expectations, we're just trying to compete, and whatever comes of that is great for all our kids."

Pearl is going after the title of the best high school boys' team in Mississippi history, and have certainly made a case for that after their performance in Danville, Ala.

Bryant's performance of 15:40.1 was the new Miss. No. 1, as well as the Jesse Owens course record. However, those marks stood for approximately 40 minutes.

In the Gold Boys Division, Jaheim Bridges and Taylor Brown, as well as Gabe McElwain of Walnut, lined up to eventually make history.

Bridges, Brown, and McElwain, three training partners and All-MileSplit Mississippi XC team members from the Northeast Mississippi region, followed the leaders to a 4:45 first mile before forming a chase pack amongst the three of them, along with other out-of-state competitors. McElwain hit the 2-mile mark first in 9:46, with Bridges and Brown close behind.

With one mile to go, McElwain trusted his fitness and made a big move, and it paid off when he crossed the finish in a new lifetime best of 15:30.2, destroying the 16-minute 5K barrier for the first time in his career.

All three hit lifetime bests on the day in Danville, Ala. In other news, Brookelyn Morgan was the top Mississippi finisher in 19:30.0, placing 46th in the Varsity Girls Gold race. Corinth's Elsie Wilbanks also broke the 20-minute 5K barrier for the first time in her career, running 19:59.8 to finish sixth in the Bronze Girls Division.

Middle School superstar Andrew Brown, the little brother of Taylor Brown, ran 10:47.5 in the 2.1 mile to snag his third win of the season.

The Corinth High School boys finished runner-ups in the Bronze Division and were led by Ross Evans in a 16:53.4.

9th-grader Maggie Irwin of Oxford was the top Mississippi girl in the Silver Girls division, running 20:15.30 to finish 26th overall.