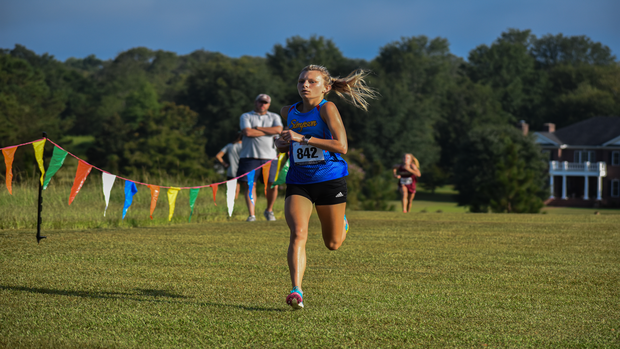 Much like the high school boys but even more so, course records came crashing down in High School Girl's competition at the 2022 Early Bird 2-miler.

The charge was led by the hometown here out of Simpson Academy, Layla Warren, running 11:59.30 to become the first girl to ever go sub-12 at Neely Farms.

Very similar to the boy's race, Warren took the lead early and never looked back, bringing the field through in a blazing sub-5:50 first mile. Somehow, Warren dug deep and found another gear, crossing the line in 11:59. Rankin was eight seconds back, finishing runner-up in 12:07.6, which also an outstanding season opener.

The top three finishers were all under the previous course record of 12:36.9, previously held by Simpson's Lilly Overby. As a matter of fact, Overby was the third-place finisher to round out the top three under the course record, as she crossed in a time of 12:28.0.

East Rankin Academy's Emily Williams and Audrey Mayatte rounded out the top five in 12:36 and 12:38, and are also now on the top five performers list at Neely Farms in the 2-mile.

We were a little more off with this one... We indeed called who the top two were going to, we just got it a little switched up.

We knew Warren was going to make it a race, and that is exactly what she did.

In retrospect, we should have expected nothing less from the fiery, front-running freshman from Simpson, and will keep that into account for the next prediction.

However, the entire top 10 raced very well, as there were some extremely fast times on a very hot day, and it's still August.

This should get us very excited, as it is looking like it could be another historic year.