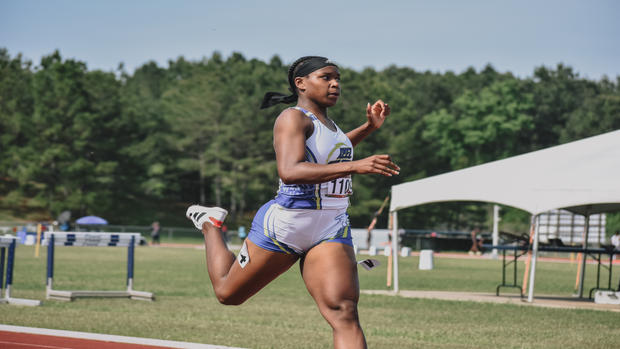 "What Kennedi Sanders has done for the sport in Mississippi has been nothing short of incredible. Not only has she accomplished incredible feats in her own career, but has also raised the overall level of competition on her team, as well as the entire state of Mississippi. It will be very exciting to see what the sport of track and field does for her in her post-high school career."
- Chris Webber, MileSplit Mississippi State Editor

The 5-foot-6 senior sprinter won three individual state titles (in 100-, 200- and 400-meter dash) along with a shared relay crown at the MAIS 6A State Meet this past season, leading the Patriots to the team title. Sanders added two more victories in the 200 and 400 at the Mississippi T&F Meet of Champions. Sanders' six gold medals came at distances from 100 to 400 meters. In this spring's MAIS 6A 4x100-meter relay, she ran the anchor leg for a foursome that clocked a 49.23 to break an all-class MAIS record set in 1972. The state's returning Gatorade Girls Track & Field Player of the Year, her season-best times in the 100 (11.75) and 200 (24.02) both ranked among the nation's Top 65 girls prep competitors in 2022. At the time of her selection, Sanders' season-best clocking of 54.09 in the 400 was tied for the nation's No. 25 time among prep girls in 2022. A USA Track & Field Southern Association All-American, she graduated as the MAIS all-class state record-holder in 200 and 400, and the MAIS Class 5A record-holder in 100.

A member of the Youth Restoration Community Church, Sanders has served on behalf of its youth ministry, assisting adolescents. She has also volunteered with the church community's Youth Initiative, feeding families in need on holidays and assisting with backpack giveaways to underserved children. This spring, she organized track clinics for local elementary and middle school girls. "Sanders is a talented sprinter with excellent range," said Erik Boal, an editor at Dyestat. "She closed out her career in style with three individual titles at the state meet and shared in her team's record-breaking 4-x-100 relay clocking. She graduated having staked a claim as a 'different-level' competitor with three national Top 100 times, including No. 25 in the 400."

Sanders has maintained a 3.39 weighted GPA in the classroom. She has signed a National Letter of Intent to compete on an athletic scholarship at LSU this fall.

Gatorade has a long-standing history of serving athlete communities and understands how sports instill valuable lifelong skills on and off the field. Through Gatorade's "Play it Forward" platform, Sanders has the opportunity to award a $1,000 grant to a local or national organization of their choosing that helps young athletes realize the benefits of playing sports. Sanders is also eligible to submit a short video explaining why the organization they chose is deserving of one of twelve $10,000 spotlight grants, which will be announced throughout the year. To date, Gatorade Player of the Year winners' grants has totaled more than $3.5 million across more than 1,300 organizations