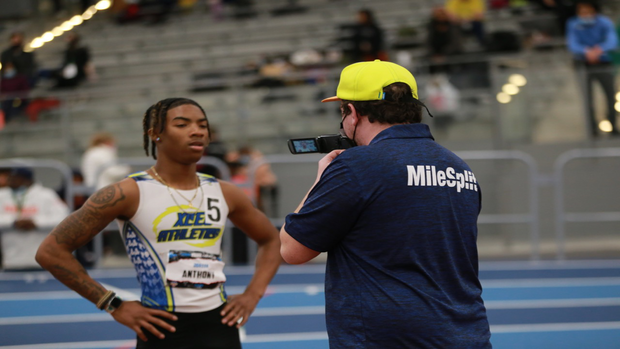 If anyone has been paying attention to the track and field world as of late, then it would be impossible to miss out on sprinter phenoms Jordan Anthony and Kennedi Sanders. These two are some of the best sprinters in the nation and have huge futures ahead of them.

Jordan Anthony, who is a University of Kentucky commit for both football and track, recently busted open a huge performance of 6.65 for the 60m dash! For those that don't know the magnitude of that performance, that time ranks him at #1 in the world for U18. In addition to that here are some other facts about that historic performance.

Alongside his all-time mark, he ranks among Olympian Noah Lyles and Josephus Lyles, two twins that have gone on to have stellar track careers since high school. On top of that, in the same meet where he ran his 60m PR, he also ran a best in the 200m as well. He won his race in an astounding 21.06, and just when you thought that his 60m performance was impressive, he keeps on going.

Anthony has only continued to improve with no stopping in sight. He is, without a doubt, one of the fastest sprinters in the nation as well as a piece of Mississippi track and field history.

The prodigy, Kennedi Sanders, is no joke either. She has been extremely talented from day one and has only continued her success. Since 7th-grade she has been one of the best in the state and has continued to dominate the Mississippi and national scene.

She recently committed to LSU, where she will surely continue to have a successful career.

Like Anthony, She recently traveled up to Chicago and ran two of the best times of her career. She opened up her day with a mind-boggling 60m dash of 7.39! This was surprisingly not a state record but it did rank her right behind former Stanford All-American Janice Davis. That may be impressive as it is, but there is more to this astounding resume of times.

This time ranks as:

But of course, there's more to tell for this Madison native. She also put up her second-best 200m indoor mark of all-time with a final score of 24.09. This still ranks behind NCAA champion and Olympic Trials qualifier Bianca Knight, but that is incredible company to stand alongside. Here are some more interesting facts about her performance in Chicago.

What makes Sanders so great is that she is able to perform exceptionally well in the short sprints, but she is also able to step up to the 400m and show out as well. As most people may have seen, Sanders ran one of the fastest times in the nation in the quarter-mile race and secured her place as the fastest indoor 400m runner of all time, but she didn't stop there, she has some pull in the world rankings as well.

All of these times are impressive, but let's imagine - What if Sanders was competing in college right now? How would she rank?

Well, in all of college competition (NCAA, NAIA, NJCCA) she would rank #67 in the 60m, #133 in the 200m, and #172 in the 400m. Though that may seem not as impressive as her other stats, those competitors are some of the best in the world and will go on to represent several countries in terms of national championships and Olympic qualifiers.

Kennedi Sanders is yet another contributor to Mississippi track and field history and will be strongly remembered in the years to come. Her presence on the Mississippi field was set early on and will still be felt once she begins her career at LSU.

Both Jordan Anthony and Kennedi Sanders are some of Mississippi's finest and represent what this state is all about. Excellence. Though they will leave us this coming year, they will forever be known as some of the best in Mississippi High School State history and will influence other runners to push themselves to new limits.