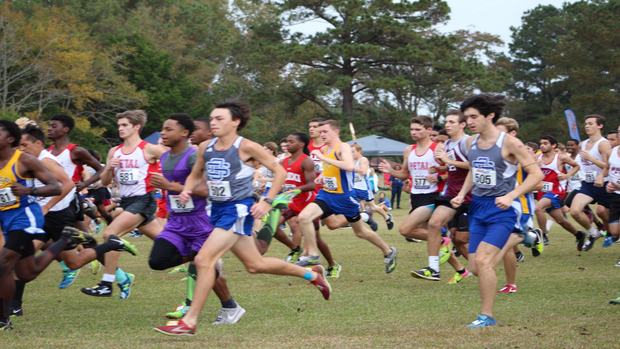 By definition, 'the group of death is a tournament group in a multi-stage tournament that is unusually competitive because the number of strong competitors in that group is much greater than any other group in the tournament.

All the key players were there - Ocean Springs and Pearl had two very strong programs, as well as many other runners who went on to run in the NCAA/NJCAA/NAIA, including Hayden Shows, Slater Richardson, Patrick Spurgeon, Austin Bourne, and many, many others.

With the reign of MHSAA 6A legends such as Nakenbe Fleming, Giacomo DeLuca, and Lake Spradling now over due to graduation, a new cross country state champion would be crowned at Choctaw Trails on November 4 of 2017.

However, lurking in the shadows of all of these talents was quite a big talent himself, and that was Pearl High School's middle-distance ace, Tony Mack.

Tony Mack was a senior who had gone 1:57 800m/4:27 1600m on the track, as well as recently posting a very impressive 16:26 5k and a runner-up finish to Hayden Shows at the very stacked 2017 MHSAA District 5-6-7 Championships just 10 days prior to the state meet. Mack had numerous State medals and All-MHSAA 6A finishes, but had never won a cross country meet in his entire career. As a matter of fact, he was Pearl's #2 (on a very talented squad) for the first half of the year.

Toward the second half of the season though, Mack was catching fire in each race and was peaking at the right time of the season. The lineup was a good one, and as mentioned earlier, someone on the start line was going to win their first-ever state title in cross country.

The gun went off, and Ocean Springs and Pearl got out well and were sizing each other up as they charged down the starting declining hill. The pack bunched together up front, and it was Horn Lake's Antonio Izaquirre, who went on to take 2nd in the 3200m at the 2018 MHSAA 6A Outdoor Championships the following outdoor season, who took the leading duties early and made sure the pace got out to a hot start. Pre-race favorite Hayden Shows was right on his tail, as was Oak Grove's Clay Derrick, the 2018 MHSAA 6A 1600m State Champion, as well as Pearl's and Ocean Spring's front runners. Izaquirre led a pack of about 20 runners who were all in contention for the win after the first mile. As they entered the woods, Shows and Derrick took over and made a big surge, breaking the pack into seven - Derrick and Shows up front, followed by Ocean Springs' Matthew Mestayer and Beck Guidry, Pearl's Mack and Patrick Spurgeon, and Brandon's Austin Bourne.

Pearl seemed to be leading at halfway as they had the rest of their scoring 5 in the chase pack versus Ocean Springs only having two, their 5th man being way back.

Back up front, Shows and Derrick surged on, yet Mack calmly responded to each and every move. With about 600 meters to go, it was all down to Shows, Derrick, and Mack. Their surges, mostly led by Shows, had broken the rest of the field except one. Mack had patiently waited behind Shows and Derrick for nearly the whole race, and as they reached the bottom of the finishing hill climb, Mack pounced.

Being a 1:57 800m runner, Mack definitely had the leg speed on his competition in a finishing kick. That's what Mack thought as well as he powered up his hill to try and win not only the individual state title, but his first race ever... and what better race to do it than his last race ever.

The race wasn't over yet, as Shows found another gear and chased Mack up the hill. Mack never even broke a stride and continued to press up the hill and through the line, winning the 2017 MHSAA 6A Cross Country State Championship in classic underdog fashion. Shows was not far behind in 2nd, and Derrick rounded out the Top 3.

In the team battle, Pearl held onto their lead and clinched it when they put their scoring 5 inside of the top 11, nabbing Ocean Springs by 12 points, scoring 35 to their 47.

Full Results on Next Page>>>