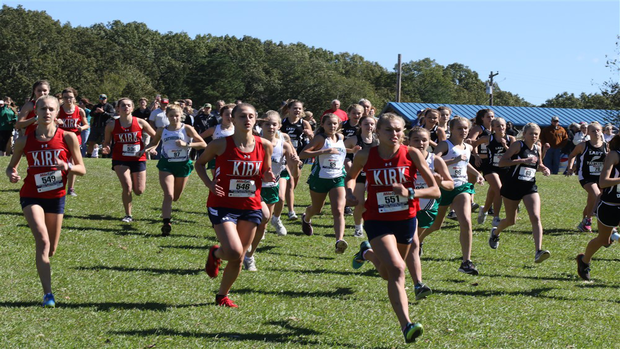 In the 2nd edition of the MAIS State Meet Classics, we have the 2017 Kirk Academy Girls Squad, perhaps the most dominant girls team in a single year in MAIS history.

That year, and every other year that she was in attendance at that school, Kirk was led by none other than Morgan Claire Rose, one of the greatest female distance runners in Mississippi High School History. Rose ended her prep career at Kirk with PR's of 2:15, 4:53, and 10:43 on track, as well as 14:25 in the 4k and 17:50 in the 5k on the grass. With these marks, Rose was the MAIS Record Holder in every distance from the 800m to the 5000m and is #2 All-Time next to Cory McGee in both 1600m and the 5000m(XC). These marks also got her a spot on the University of Mississippi's track and cross country teams, which is where she currently competes to this day.

The 2017 MAIS 3A Cross Country State Meet was gearing up to be Rose's last run at Choctaw Trails. She would be going for yet another MAIS State Title, which is a feat that she has been accomplishing for a long time up to this point - Her first-ever state title was in 7th grade.

However, as the saying goes, a rising tide lifts all boats - Including the boats, AKA runners, on Rose's own team. The Kirk Academy Girl's program had been seemingly getting better and better each year, led by Rose and coached by her father, Chuck Rose. The year prior at the 2016 MAIS Cross Country State Meet, they put 5 in the top 8 on their way to a 39 point victory, scoring 20 points total. And the year before that, a 22 point victory putting 3 in the top 4, and 4 in the top 7.

They were obviously going for the 3-peat at the 2017 MAIS State Meet. However, little did they know, that as the Kirk Academy girls squad of Rose, Caroline Perry, Carley Hudspeth, Molly Lane, and Elizabeth Taylor stepped on the line at Choctaw Trails - Some of them being their last time ever- they were about to make MAIS history.

As expected, Rose came through in a blistering 14:25, averaging out to be 5:48 per mile for 2.5 miles on a solo effort. Then, a few moments later, the rest of the race began to come through.

Teammate Caroline Perry, who went on to become the 2018 MAIS 3A State Champion 1 year later, came through in 2nd place overall. Right behind Perry was the senior Carley Hudspeth, which basically sealed the deal on Kirk's 3rd straight cross country state championship as they had secured the top 3 spots. As a matter of fact, no other team in MAIS history had ever put 3 in the top 3 at the state meet.

And then... the 4th and 5th place finishers, both wearing red singlets came charging up the finishing hill, battling for the final top 5 spots. Those red singlets belonged to Molly Lane, the 7th grader, and Elizabeth Taylor, the senior, both ailing from Kirk Academy. They crossed the line 2 seconds apart, tallying up Kirk's scorers at positions 1,2,3,4, and 5.

And, if my math is correct... That means Kirk Academy scored a perfect score of 15 points, something that had never been done before in Mississippi history. Like I mentioned before, no one had even put 3 in the top 3 until they did it in that same race.

The stacked squad of the 2017 Kirk Academy girl's team had been a long time coming, and what a great 'going-away' party they had for the seniors on October 24 of 2017 at Choctaw Trails.

As mentioned before, Morgan went on to secure her state titles over track season, finishing off her prep career with 21 state titles and is currently running at the University of Mississippi. Perry went on to win a state title the following year in cross country and now runs for Mississippi College. Hudspeth was part of the state champion 4x800m relay at Kirk and currently plays basketball for the University of Central Arkansas. 7th-grader Molly Lane is now a junior at Kirk, where she is a multiple-time state champion in the 100m and 200m dash. And Taylor, a multiple-time medalist in track, also played a huge role in the state champion 4x800m relay team, and also finished 4th in the state with a 2:33 PR.

All that to say, that team that year was full of stars, and the stars aligned on that day at Choctaw Trails and gave us one of, if not the best state meet performance in MAIS history.