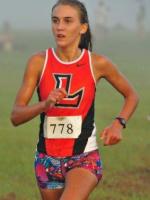 Senior Girls Rankings: Kayla Johnson Clocks US#1 800m 2...
Southridge senior and University of Miami signee Kayla Johnson clocked a US#1 time of 2:10.89 in the 800m to win the Louie Bing Classic. Johnson is one of the top females in the senior class. We rank ...

Amazing Ani: 12 Year Old Veltcheva Goes 17:44 At Matanz...
Ani Veltcheva isn't even a teenager yet. The 12 year old from Abraham Lincoln Middle School in Gainesville has been beating competition twice her age for several years now and continued the trend thi...

Which Senior Girls Have Improved The Most Since Freshme...
Lemon Bay's Kelsi Ogilvie only ran a handful of races her freshman year with her fastest coming at the Flrunners.com Invitational and a time of 25:34.20. Four years later Ogilvie was district and re...

19 Senior Girls Under 19 Minutes At State - Good Friend...
Good friends Kayla Easterly and Kristlin Gear finished third and fourth in the girls 3A race. Their times of 18:14.51 and 18:23.01 rank as the third and fifth best times by any senior at the state mee...