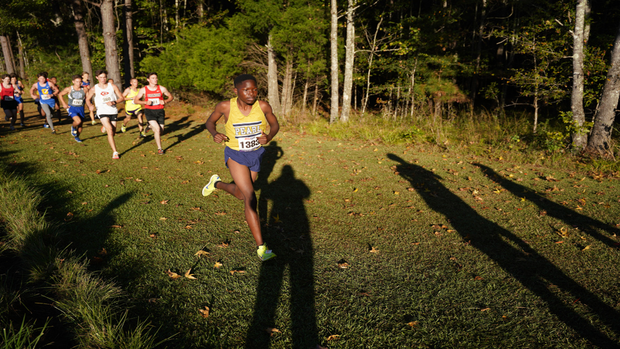 CLINTON, Miss. --- Pearl's JaQuavion Bryant and Madison St Joseph's William Fugate gave us a battle for the ages at the 2022 Clinton Arrow Invitational on Saturday.

Pearl's Farren Oberto also achieved the MileSplit USA Second-Team Standard with his 5K performance of 16:16.1, suitable for a top three overall performance on the day. Madison Central's Colin Brannon and Benjamin Owens rounded out the top five in 16:37.0 and 16:42.5, respectively.

The 2022 Clinton Arrow Invitational was Bryant's second outing of the 2022 Cross Country season after a 16:29 5K at the 2022 City Auto Memphis Twilight Classic back on Sept. 4. That was a 25-second PR for Bryant at the time, and has now again PR'd by 31 seconds.

Bryant now has the second-fastest time in Mississippi behind Tupelo's Taylor Brown, the All-MileSplit Mississippi XC No. 4 high school boy. According to our records, he is only the fifth sophomore to ever break 16 minutes in the 5K and Mississippi history.

The overall sophomore state record in the 5K sits at 15:39, held by Tupelo's Robert Scribner.

As for Fugate, he has had a dominant 2022 Cross Country campaign.

Fugate also opened up his season at the 2022 City Auto Memphis Twilight Classic, running 16:15.6 to beat Bryant and Taylor Brown to finish in eighth place.

Fugate then garnered two wins at the 2022 Benton Academy XC Invitational and 2022 MRA XC Invitational, running meet records and winning by over 90 seconds in both races. After running 16:00.0 as a sophomore at the 2021 RunningLane XC Championships, Fugate finally cracked the barrier in an epic dual with Bryant.

Pearl High School won the overall team title in a dominant performance, having all five runners under 17 minutes in the 5K. At this time last year, this feat had never been done before in Mississippi history.

Pearl is the second team to do so after Oak Grove High School, the No. 1 ranked High School Boys Cross Country team in Mississippi, put their scoring five under 17 minutes in the 5K at the 2022 Saltillo XC Invitational.

No team has ever had six runners break 17 minutes on the same day, or spread out over the entire season. The Pirate's No. 6 runner, sophomore Karol Gonzales, ran 17:18 on Saturday at the 2022 Clinton Arrow XC Invitational.

Could Pearl do the unthinkable and solidify their spot as the deepest high school boys squad in Mississippi history?