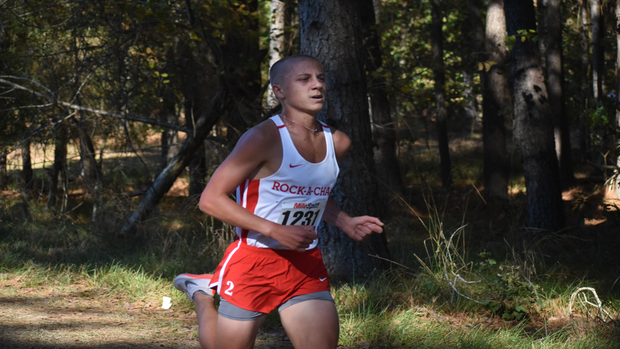 The 5-foot-10, 140-pound senior distance talent led the Rock-A-Chaws to second place as a team at the MHSAA Class 3A State XC Championships this past season, breaking the tape to win the individual title with a time of 15:45.20-the fastest all-class clocking of the state meet. Leverett also won the Mississippi XC All-State Meet of Champions with a time of 15:39.39 and the Watson High School Meet in a personal-best 15:37.73. A four-time MHSAA All-State selection and three-time state champion, he clocked the state's fastest boys prep 5K time in 2021, recorded six times below 16 minutes and was the top Mississippi finisher at the national RunningLane XC Championships.

Inducted into the Mu Alpha Theta mathematics honor society, Leverett is a member of both the Hancock Youth Leadership Academy and Hancock Youth for Positive Efforts. Also a student ambassador at his school, he participates in the St. Stanislaus choir in addition to having volunteered locally on behalf of community service initiatives associated with the National Honor Society. "Leverett is a real competitor," said Jason Law, head coach at East Central High School. "He continued to get better every season, which is exactly what you want out of a runner. He finished first in almost every race he entered as a senior, capping it all off with a victory at states and the fastest all-class time of the day."

Leverett has maintained a 4.5 weighted GPA in the classroom.

Gatorade has a long-standing history of serving athlete communities and understands how sports instill valuable lifelong skills on and off the field. Through Gatorade's "Play it Forward" platform, Leverett has the opportunity to award a $1,000 grant to a local or national organization of their choosing that helps young athletes realize the benefits of playing sports. Leverett is also eligible to submit a short video explaining why the organization they chose is deserving of one of twelve $10,000 spotlight grants, which will be announced throughout the year. To date, Gatorade Player of the Year winners' grants have totaled more than $3.5 million across more than 1,300 organizations.

To learn more about the Gatorade Player of the Year program, check out past winners or to nominate student- athletes, visit playeroftheyear.gatorade.com or follow us on social media on Facebook at facebook.com/GatoradePOY, Instagram at instagram.com/Gatorade and Twitter at twitter.com/Gatorade.

Watch the Workout Wednesday that MileSplit Mississippi produced with Leverett before the 2021 Cross Country Season!