Competing in his first season of cross country, Jack Hewes of Saint Patrick High School drew attention as he ran two sub-16-minute 5ks during the 2021 season, a highly impressive accomplishment for a high school sophomore.

Prior to running, Hewes played basketball for St. Patrick. His first race experience was a 5k charity run in the fall of 2020. Hewes's father encouraged him to try to keep up with a talented runner they noticed, and Hewes ended up winning the race with a sub-18-minute time.

After basketball playoffs concluded, Hewes subsequently went out for track in the spring. After only a few weeks of practice, Hewes raced the mile for the first time at the 2021 St. Patrick Invitational on March 22, running 4:57.15. "With very little training he finished running 4:44.40 at the 2021 MHSAA State Championship Meet on May 1 as the 2A State Champion," said Hewes's coach Tim McDaniel. McDaniel described Hewes as "one of the most gifted aerobically fit endurance athletes I've come across in my 23 years of coaching." Hewes was sidelined with an injury for about a month over the summer, yet he went on to have an incredibly successful cross country season in the fall of 2021.

Hewes ran 17:04 at his first cross country race on Sep. 9, placing third at the 2021 George County Trail Run. He then ran 16:47 at his next race, the 2021 Olan Welch Cross Country Classic on Sep. 25, finishing second behind senior Keegan Leverett of Saint Stanislaus High School.

He continued to drop his times in the next three successive races: running 16:18 to place first at the 2021 Ocean Springs Invitational on Oct. 2; then finally breaking 16 minutes with a 15:57 for a win at the 2021 Watson High School Meet on Oct. 16, and dropping his time further with a 15:54 and second-place finish at his regional meet on Oct. 29. 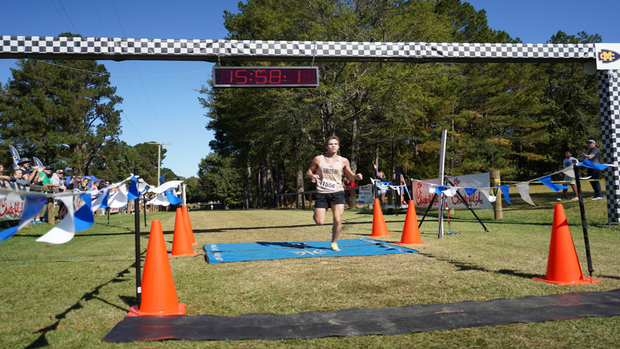 At the state meet on Nov. 8, Hewes closed his season with a second-place finish in the 3A division (behind two-time 4A state champion Leverett), leading St. Patrick to an MHSAA 3A State Title.

According to McDaniel, Hewes is still "an integral part of our school's basketball team," and will most likely remain so for the remainder of his high school career. Along with basketball, Hewes continues to run on his own in his spare time to prepare for the track season.

Hewes aspires to break 4:30 in the 1600m in the upcoming track season, and he also plans to attempt the 800m and 3200m "to gauge his abilities in those distances," said McDaniel. Hewes's track season accomplishments will be the foundation for his goals for next year's cross country season.