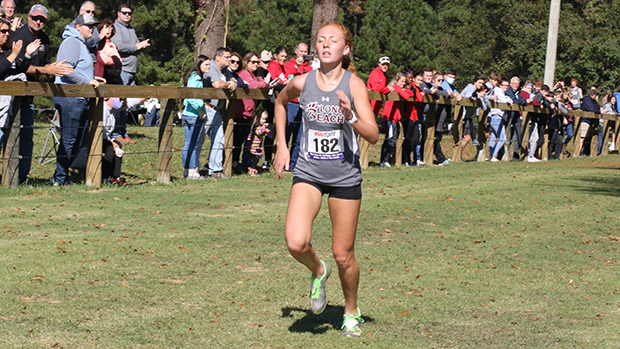 LONG BEACH HIGH SCHOOL STUDENT-ATHLETE NAMED GATORADE MISSISSIPPI GIRLS CROSS COUNTRY PLAYER OF THE YEAR CHICAGO (April 8, 2021) - In its 36th year of honoring the nation's best high school athletes, The Gatorade Company today announced Brooklyn Biancamano of Long Beach High School as its 2020-21 Gatorade Mississippi Girls Cross Country Player of the Year. Biancamano is the first Gatorade Mississippi Girls Cross Country Player of the Year to be chosen from Long Beach High School.
The award, which recognizes not only outstanding athletic excellence but also high standards of academic achievement and exemplary character demonstrated on and off the field, distinguishes Biancamano as Mississippi's best high school girls cross country player. Now a finalist for the prestigious Gatorade National Girls Cross Country Player of the Year award to be announced in April, Biancamano joins an elite alumni association of state award winners in 12 sports, including Lukas Verzbicas (2010-11, 2009-10, Carl Sandburg High School, Orland Park, Ill.), Megan Goethals (2009-10, Rochester High School, Rochester Hills, Mich.), Jordan Hasay (2008-09, Mission College Preparatory Catholic High School, San Luis Obispo, Calif.) and Chris Derrick (2007-08, Neuqua Valley High School, Naperville, Ill.).
The state's two-time returning Gatorade Girls Cross Country Player of the Year and Track and Field Player of the Year, the 5-foot-4-inch junior distance talent led the Bearcats to fourth place as a team at the MHSAA Class 5A State XC Championships this past season, breaking the tape to win the individual title with a time of 18:15.60 - the fastest all-class clocking of the postseason. A four-time state champion and All-State selection, Biancamano ran the state's top 5K girls time (a personal-best 17:41.18) in 2020, which was 24.77 seconds faster than her next-closest competitor. Also the 2020 Clarion-Ledger Girls Cross Country Athlete of the Year, she won the Mobile Challenge of Champions Invitational Division race last fall and holds state club 5K records for the 13-, 14- and 15-year-old age groups.
Biancamano is a co-leader of Long Beach High's Fellowship of Christian Athletes chapter and belongs to the school's community service Rotary International Interact Club. Conversant in American Sign Language (ASL) and a member of the Michael Memorial Baptist Church youth group, she has served as a member of the Long Beach Mayor's Youth Council and her school's Junior Civitan club, and she has volunteered as a mentor with the Heritage Christian Academy (Picayune) Cross Country Camp. She has also donated her time on behalf of a baseball program for physically and intellectually challenged youth as well as coastal clean-up efforts and the Quarles Elementary School Field Day. "Now a five-time Gatorade winner, Brooklyn is knocking on the door of becoming Mississippi's most decorated Gatorade Player of the Year honoree as a runner," said Erik Boal, an editor for DyeStat. "She trails only Pass Christian's Cory McGee (2007-10 in cross country and track), who won six times, went on to become a 10-time All-American at the University of Florida. Brooklyn PR'd in the 5K this past season with the state's fastest girls clocking and won a fourth state title. Hard to argue with her winning again."
Biancamano has maintained a 5.48 weighted GPA on a 4.0 scale in the classroom. She will begin her senior year of high school this fall.
The Gatorade Player of the Year program annually recognizes one winner in the District of Columbia and each of the 50 states that sanction high school football, girls volleyball, boys and girls cross country, boys and girls basketball, boys and girls soccer, baseball, softball, and boys and girls track & field, and awards one National Player of the Year in each sport. The selection process is administered by the Gatorade Player of the Year Selection Committee, which works with top sport-specific experts and a media advisory board of accomplished, veteran prep sports journalists to determine the state winners in each sport.
Three-time winner Biancamano joins recent Gatorade Mississippi Girls Cross Country Players of the Year Katelyn Cartwright (2017-18, Hernando High School) and Kate Mattox (2016-17, Starkville High School), among the state's list of former award winners.
Through Gatorade's cause marketing platform "Play it Forward," Biancamano has the opportunity to award a $1,000 grant to a local or national youth sports organization of their choosing. Biancamano is also eligible to submit a 30- second video explaining why the organization they chose is deserving of one of twelve $10,000 spotlight grants, which will be announced throughout the year. To date, Gatorade Player of the Year winners' grants have totaled more than $2.7 million across 1,117 organizations.
Since the program's inception in 1985, Gatorade Player of the Year award recipients have won hundreds of professional and college championships and many have also turned into pillars in their communities, becoming coaches, business owners, and educators. To learn more about the Gatorade Player of the Year program, check out past winners or to nominate student-athletes, visit www.playeroftheyear.gatorade.com, on Facebook at www.facebook.com/GatoradePOY or follow us on Twitter at www.twitter.com/Gatorade.