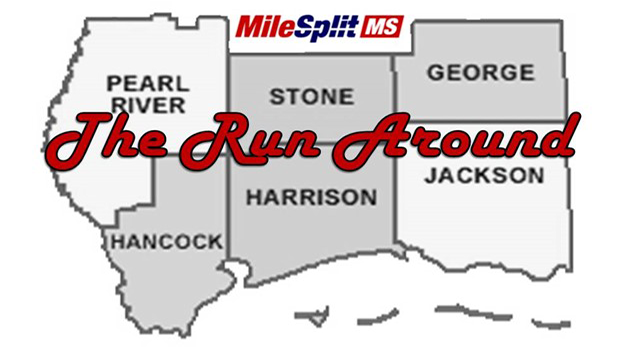 Relay Weekend in the Bottom Six

Welcome back!  It's me again, your favorite or most annoying Coach on the coast...and I'm here to give you the run around on what's going on in the Bottom Six Counties!

This weekend on the coast we have two relay meets on tap, one at Gulfport and one at Saint Stanislaus.

Gulfport is hosting the Prince Jones Relays on Friday, a date they changed from Saturday because their girls' basketball team has advanced to the State Tournament.  Go Admirals!  The Rocks will host their meet on Saturday.

It's the 23rd running of the Rock-A-Chaw Relays, and the following schools will be in attendance:  Bay High, Cabrini out of New Orleans, Dominican out of New Orleans, Long Beach, Moss Point, Mt. Carmel out of New Orleans, Our Lady Academy, Pass Christian High School and Middle School, Saint Patrick, and host Saint Stanislaus.  The Rock relays include middle school and high school divisions.

Both of these meets will have similar formats.  All of the field events will be contested followed by relay races on the track; there will be no individual running events.  In addition to the 4x8, 4x2, 4x1, and 4x4, a distance medley relay and a spring medley relay will be run.  The distance medley consists of four legs - one 1200 meter run, a 400 meter run, an 800 meter run, and finally a 1600 meter run.  The sprint medley begins with two 100 meter dashes, followed by a 200 meter leg, and ending with a 400 meter anchor leg.

It's hard to make any sort of predictions in the relay events this early in the year, but let's look at potential field event performances for these two meets.

At the Prince Jones Relays, look for Tamarcus Garrett of Gulfport to shine at the high jump, last year he went over 6-4.  George County's Dylan Lawrence looks to lead the long jumpers; his PR is 23-3.  In triple jump look out for Cameron Cook of D'Iberville, and Jordan Montgomery and Asonti Hall of Biloxi - all should be over 43 feet.  Tyler Stansberry of George County looks to improve on his PR of 13', but look out for Saint Martin's Logan Sexton too - he's cleared 11'.   George County's Kaya Ludgood is only a sophomore, but looks to improve on a 47' PR.  Finally for the boys, Adam Pani of Pascagoula should lead an impressive field.  His PR is 128-3, but there are 5 in the field who have gone over 120'.

On the girls' side in Gulfport, Alexandra Woodberry from Gulfport and Kaylee Foster of Ocean Springs look to lead the field.  Their PR's are 5-4 and 5-2 respectively.  Ocean Springs has a pair of good vaulters - Emma Hunt and Roslyn Inabinette - both could open the season with impressive marks.  Hunt has a PR of 12-4 while Inabinette has cleared 11'.  Samantha Burkett from George County and Dywana Parker from Gulfport will battle at the top of the discus field - these two are both over 100' and well out in front of the rest of the field.  In girls' shot, I think Biloxi senior Anna Thigpen will prevail; her PR is a 37-3.

At the Rock-A-Chaw Relays, we've got two young men trying to get to 20' in long jump.  Long Beach's Derek Young has gone 19-11 while Saint Stanislaus Davis Scharp was reached 19-8.  These two should lead the field, and I hope they both get to 20 plus!  I think Derek Young should win the triple jump too; he's a couple feet ahead of the next best in the field with his PR of 40-3.  Three young men sit atop the group of high jumpers:  Aiden Hull from Long Beach, and SSC's Chris Lucore and Brandon Bordelon.  Bordelon leads the group with 6-0, but Hull and Lucore have both cleared 5-10.  SSC's Taylor Necaise and William Weber will duke it out in Pole Vault - they've been over 12-6 and  11-6 in competition, but have both been working hard and clearing high heights in practice.  Tony Pham from Long Beach could get in the mix with those two as well, he's cleared 10-6.  Shot put looks to be owned by Moss Point, Jeffery Harmon and Michael Tapper have thrown 44-4 and 43-5 respectively.  Finally in discus, SSC's Joe Reeder and Long Beach's Torique Bester will lead a healthy field.  These two are over 120-0, but a total of 5 in the field have gone over 100-0.

For the girls at the Rock Relays, the exciting part may indeed be the relays - but there will be some strong performances in the field too.  Three girls over 5-0 in high jump:  Jade Peoples from Cabrini, Kamdyn Skinner from Pass Christian, and Liz Messonnier from Dominican.  I look for Cabrini's Endia Buck to take long jump, her PR is 17-0.5.  But Tytianna Burage of Long Beach and Kylaryn Kilpatrick of Bay High will be close behind her.  Look for Buck and Skinner in the triple jump too.  Pole vault is going to be a tight competition.  We've got 3 girls at 7-0, two at 7-6, one at 8-0, and Grace Bradford from Our Lady Academy at 8-10 while Kendall Pitre of St. Patrick is at 9-0.  I hope they have perfect conditions and a slight tailwind.  Cabrini's Jailen Doyle and Dominican's Abby Slattery will lead the field in discus, throwing 95-1 and 92-11 respectively.  Finally, in shot put Doyle looks to push her teammate Bailey Braud who leads the field with a PR of 37-1.

Remember, the Rock-A-Chaw Relays has a junior high division too - so the youngsters will be competing as well.