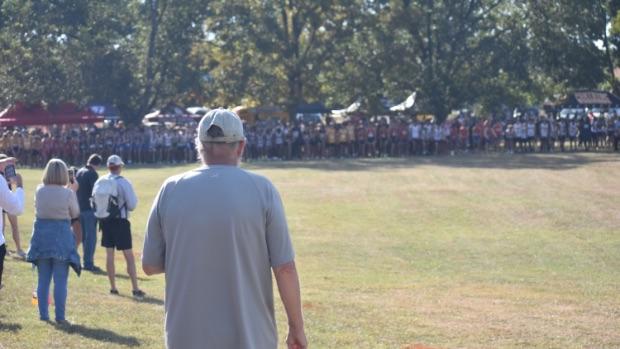 PONTOTOC, Miss. --- The 2022 Pontotoc XC Invitational was yet another testament to the historical 2022 Mississippi Cross Country season.

Starting with the Large School Varsity Girls 5K, we were treated to one more classic matchup between two of the best female distance runners in North Mississippi - Anna Caroline Crouch of Saltillo, and Hannah Sanders of Mooreville.

After the first 400-600 meters, a pack of Crouch, Sanders, and Corinth's Elsie Wilbanks formed as the lead pack, with Caledonia's Emma Ruffin in tow. The pack of Sanders, Crouch, and Wilbanks continued to grind the pace up front, with all three athletes still in the conversation for an individual win with one kilometer to go.

With less than two minutes left of running, Crouch made her move to gear up for her finishing kick. As the finish line approached, she had a 10-meter gap on Sanders, and that was all she needed to pull off the win, stopping the clock in a 5K PR of 19:35.5. Sanders placed runner-up, 19:37.0.

This was Crouch's first-ever 5K win on the grass and is a great confidence booster heading into the 2022 Watson High School Cross Country Classic - The biggest Cross Country showcase in Mississippi.

Wilbanks held off Ruffin to finish third, 19:50.7 to Ruffin's 19:55.9. All four of the athletes mentioned above that placed in the top four performed lifetime bests.

In the Large School Varsity Boys 5K, runners were coming out of the woodwork left and right to upset the MileSplit Mississippi predictions of this race.

All in all, this was a stacked race with All-MileSplit Mississippi XC team members Chandler Ray of Falkner HS and Parker Shannon of Saltillo leading the way, two athletes that have both gone 16:03 in the 5K.

Oxford's Bailey Kosko was also in the mix with a 16:18 5K at the 2022 Jesse Owens Classic under his belt, but the Oxford sophomore had not taken down Shannon or Ray once this season.

After a quick sub-5 first mile in a pack that included the three runners mentioned above, as well as Corinth's Ross Evans and Mooreville's Lukas Dykes 5-10 meters behind. The Falkner Senior was the one setting the pace early on. At the halfway point, Kosko sensed the pace slowing and challenged Ray for the lead. He responded, but in a gusty effort to go for home from a long way out, Kosko asserted himself to the lead and began to create a small gap.

One kilometer later, that small gap turned into 50 meters, and it was beginning to look like Kosko would pull off a major upset.

Dykes smelled blood in the water and began to pick off the lead pack that was starting to string apart, and soon found himself in second and gaining the leader from Oxford. At the end of the Large School Boys 5K, Kosko found himself as the fourth-fastest high school boy in (updated) course history, only behind Cooper Parmer, Chase Rose, and course record holder Jaheim Bridges of Tupelo, who went 15:57.4 to win the 2021 Pontotoc Cross Country Invitational.

However, that all changed once Gabe McElwain won the Small School Boys 5K...

In a stunning showcase of the Walnut senior's fitness, McElwain had a solo effort of 15:43.8 in the 5K, a meet record and one minute and 40 seconds ahead of second place.

In an opening mile of 4:48, McElwain had a 30-second lead in the first third of his race. However, that didn't stop the All-MileSplit Mississippi No. 5 from running a 14-second meet record in what seemed like a tempo effort.

"After The Opener, I was told to stay calm in the first miles of my races versus freaking out at the beginning,", expressed McElwain on what clicked for him in the middle of his 2022 Cross Country campaign.

It worked wonders for the Walnut, Miss. native, and now has bundles of momentum heading into the 2022 Watson High School Cross Country Classic. In the Large School Girls 5K, Clinton High School pulled off a major upset to beat pre-race favorites Saltillo High School and Corinth High School, beating the Lady Warriors by two points. They were only the team to have a 1-5 split of fewer than 60 seconds.

Kossuth High's Eva Null had the race of her life and snagged her first-ever win on the grass in a lifetime best of 21:03.5 for 5K. Madison Ridgeland Academy, one of the top high school girl's Cross Country teams in Mississippi, won the team race by 45 points. The Lady Patriots placed three in the top four and had a 1-5 split of 51 seconds, the lowest in all of the varsity races.

Oxford's Toshan Delong grabbed the third win of his season, covering the 2-mile course in 12:00.4 to lead an Oxford 1-2-4 finish. That finish was enough for the Junior Chargers to win the team race by 40 points.

Teammates Caroline Henry and Riley Moore led a Clinton 1-2 finish in the Junior High Girls' 2-mile. However, Saltillo won the team title in a nail-biter against Clinton, beating the Junior Lady Arrows in a No. 6 runner tie.