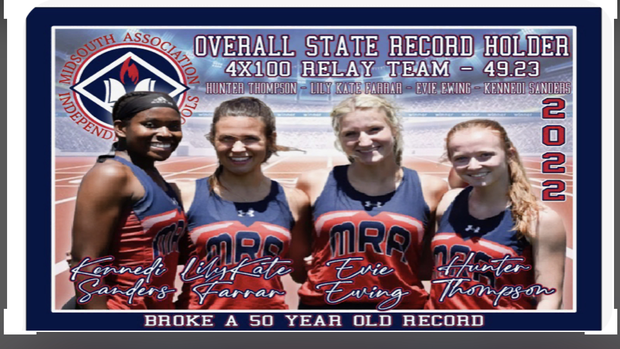 A highlight of the 2022 MAIS Track and Field State Meet was when the Madison Ridgeland Academy's girls' 4x100m relay broke the 50-year-old MAIS overall state record. MRA's time of 49.23 broke the previous record of 49.30, which had stood since 1972. But while MRA couldn't have broken the state record without these standout sprinters, it's the relay's second leg, senior Lily Kate Farrar, who makes the achievement even more incredible.

"Winning the relay was great; breaking the 50-year-old record was once-in-a-lifetime amazing, but doing it with Lily Kate Farrar on the team was a miracle and an answered prayer," said MRA Head Coach Melanie Black.

Farrar had been on the MRA track team since she was a freshman and had been one of the team's top relay sprinters, competing in MRA's previous two state championships. Black described Farrar as a joy to coach: "one of those kids that every coach wishes they had a million of." However, for most of the 2022 season, it didn't look like she'd be running at state this year at all. In fact, Farrar hadn't run in a single track meet all season due to an extended illness; after coming out for the first track practice in February, she wasn't able to practice again until late April.

Farrar's health problems began in Aug. 2021, when she fell sick with a severe case of COVID-19, missing several weeks of school. She recovered well enough to play soccer and cheer in the fall, although she had some fatigue issues.

Farrar rested for several months over the winter and came out for the first track practice on Feb. 1, thinking everything was fine. However, for the next two weeks following that first workout, she couldn't even get out of bed. She suffered from extreme fatigue, inflammation, and swelling in her hands and feet.

Farrar's doctors ran lots of tests but couldn't figure out what the problem was. Finally, when her bloodwork was sent to the Mayo Clinic, Farrar was diagnosed with mesenteric lymphadenitis, an after-effect of COVID-19 that can affect patients under the age of 19.

"I kept checking on her every week and praying for her," said Black, "and told her that she would have a place on the team when she was able to come back. But the days turned into weeks, and then the weeks into months-and she remained weak and fatigued. Then she had another setback with some ruptured cysts."

Farrar was finally cleared to practice in mid-April, after the regular season had concluded. She started with very light practices in which she never ran more than 100 meters. Black's goal was to get Farrar ready to potentially run the 4x100m relay at the state meet on May 6, which would give her the chance to finish out her senior year running one last meet.

"To begin with, she was nowhere near her top speed, her legs were out of condition, and she tired easily. Every day, I just prayed that she would hold out and not collapse," recalled Black. "She was discouraged at her inability to run fast, something that she had taken for granted all her life. But she faithfully came to practice every day and slowly got better."

Farrar steadily improved over the next two weeks of practice until just a few days before the state meet, it was decided that she could run the 4x100m relay.

"...breaking the 50-year-old record was once-in-a-lifetime amazing, but doing it with Lily Kate Farrar on the team was a miracle and an answered prayer,"

"Some other girls were running equal times to her, but I really wanted Lily Kate to get to run at the state meet-and this 4x100m relay was her only option," said Black. "She runs the second leg and always has great baton exchanges, so I felt good about having her run it."

While Black knew the girls had a chance at breaking the 4x100m record, that wasn't the team's focus. "We just treated it like another meet and another relay," she said. "I didn't want the girls to be nervous or have added pressure. We just focused on having good handoffs-and were excited that Lily Kate was finally getting to run with the team."

The first three legs of the race went smoothly. Farrar took the baton from Hunter Thompson and passed it cleanly to Evie Ewing. "Although the first three girls ran well, we were still behind by over 10 meters by the time Kennedi [Sanders] got the baton for the anchor leg, but I felt confident that she would make up the deficit and win," said Black.

Sanders did just that, surging past the leader and clinching the victory for MRA. She was easily ahead at the end of the race but didn't ease up, and Sanders's strong finish was key to breaking the record by less than one-tenth of a second.

Winning the 4x100m relay (and the state championship) and breaking the 50-year-old state record were incredible experiences in their own right, but Black said that to have Farrar as a part of the team made it one of the best moments of her coaching career.

"My prayer at the state meet is always Ephesians 3:20-that God would bless our performances on the track 'exceeding abundantly'-and breaking that relay record with Lily Kate on it definitely exceeded anything I could have asked or prayed for," said Black. "I was just so happy for her to be able to get back and run, much less to be able to break a 50-year-old record. Praise be to God."