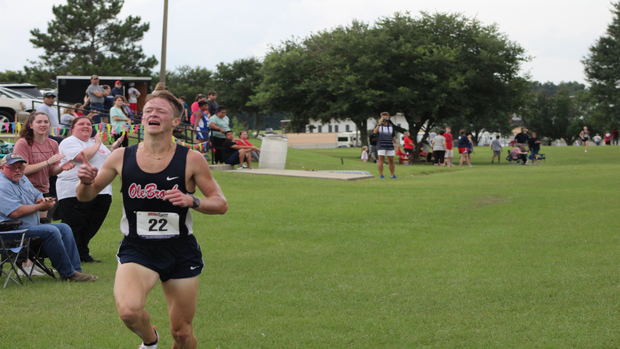 In their first official race of the season, Tupelo's Taylor and Andrew Brown completed the brotherly sweep, in which Taylor won the varsity boys 5k, and little brother Andrew took down the JV boys 2 mile.

Taylor Brown showed a lot of promise in his season opener, essentially soloing a 16:14 5k at Ballard Park, 46 seconds ahead of 2nd place teammate Jaheim Bridges. Last year whenever he ran at Ballard, he came in 2nd place in a 16:54. Taylor is obviously very fit coming into the season and he is already showing so much improvement, and it's only been one race. It will be very exciting to see what this young stud will do once he gets in a fast and competitive race.

Andrew was not going to let his brother take all the spotlight though, as he also came away with a W at the end of the day, and in impressive fashion. Andrew won the 2 mile in an 11:15... over 2 minutes ahead of the next finisher. By the end of the year, Andrew will probably be a scoring member on Tupelo's varsity team. All in all, it is unreal how much talent these 2 are showing at such a young age, and it will be thrilling to see what they will do in the years to come.

Simpson Academy's Layla Warren has remained undefeated through her 2nd race of the season, this time at the Cathedral XC Twilight race. Warren took down the field with a 12:56 2 mile, 14 seconds ahead of freshman talent from Columbia Charlee Brees Franks. Like I mentioned last week, Warren is soliciting herself as one of the favorites for the state title in MAIS 5A this year.

Perhaps the craziest and most impressive performance of the weekend was the varsity boys race at the Ole Brook Invitational. Brookhaven High School went 1-2-3 and had 2 guys break 16 minutes in the 5k(Grayson Childress-15:40, Sam Arnold - 15:59). Let me repeat that... 2 guys from the same school broke 16!! The last time a Mississippi team pulled off 2 guys in the same race breaking 16 was in 2008 when Tupelo High School pulled it off at the Chile Pepper Festival, and that Tupelo team is one of the greatest Mississippi teams in history. These guys proved that they are here not just to win state titles, but to put their names in the record books this year

Lastly, there was a trend in the HS boys that could not go unnoticed, and that is that there were quite a few that hit big PR's and put their name in the conversation for All-State positions in their respective classes. A few of those names include the Clinton HS transfer Christian Parks, Jaheim Bridges, Colin Brannon, and Jackson Stroud. Parks ran 16:41 for a huge PR, nabbing 4th at the Ole Brook Invitational. Right behind him was Brannon from Madison Central in 5th, 17:12, also a big PR. Stroud from Neshoba Central was 7th, running 17:30, a monstrous PR. Finally, Tupelo's jaheim Bridges came in 2nd at the Tupelo Invitational in 16:50. Some runners, like Bridges, have had this momentum building for a while, while others like Brannon and Parks essentially came out of nowhere. It will be very exciting to see what these 4 can do later in their season after their promising season openers.