Cory McGee, a professional middle-distance runner for New Balance, graduated from Pass Christian High School in 2010. While at Pass Christian, McGee won 22 MHSAA State Titles in Track and Cross Country. She also qualified for Foot Locker Nationals numerous times, as well as running at Nike Indoor Nationals and New Balance Outdoor Nationals. McGee even made it to the World Youth Championships in 2009, where she finished 9th in the World in the 1500m! McGee winning the 1 mile at Mobile Challenge of Champions

After graduating from Pass Christian, McGee went on to run at the University of Florida, where she was not done showing out at the world stage of youth athletics. In 2011, McGee won the 1500m at Junior Pan-American Games. Then, in 2013, McGee qualified to represent the USA for the first time at the master's level at the 2013 World Championships in her specialty event, the 1500m. Mcgee also won 6 SEC Titles, as well as 10 NCAA All-American finishes - 4 2nd Team and 6 1st Team. 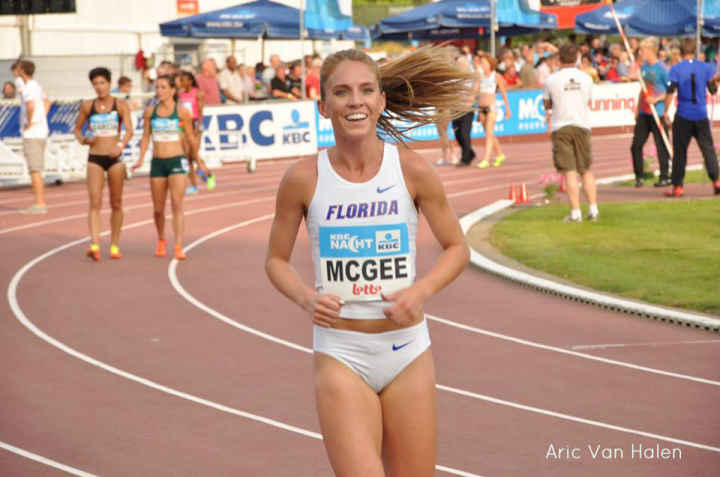 After graduating from Florida, McGee signed to run for New Balance, which is who she still runs for to this day. In 2016, McGee placed 2nd at the USA Indoor Championships in the 1500m, where she again went on to represent the USA at the 2016 World Indoor Championships, where she went on to place 13th in the World. At the 2016 Olympic Trials, however, McGee was the first one out of making the Finals, so her Olympic Dreams would have to wait...

Before Pass Christian, McGee and her family actually lived, for a short time, in Greece. It was there when McGee first realized her passion for making the Olympic Games, as she was able to watch the 2004 Athens Olympic Games because her father worked as an FBI security liaison at the Games. McGee said watching the current 1 mile World Record Holder Hicham El Guerrouj win the 1500m and 5000m helped fuel her passion for running.

Over the last 2 years, McGee has been training with a team in Boulder, Colorado under Coach Joe Bosshard. McGee moved out to Boulder with one goal in mind, and that was making the 2020 Olympic Team in the 1500m.

And 17 years after watching "The King of the Mile" in Athens, McGee was able to fulfill her dreams, and she will be going to the 2020* Tokyo Olympic Games as a competitor in the Women's 1500m.

"It's real. I've been working my butt off. We moved to Colorado two years ago and haven't looked back, and that's why I'm here today." - McGee to NBC Sports on qualifying for the Olympics

McGee finished 2nd to New Balance Teammate Elle Purrier St. Pierre in a PR of 4:00.63. Pierre's winning time of 3:58.03 broke the US Olympic Trials Record. Another New Balance teammate, Heather Maclean, finished 3rd and will also be joining them in Tokyo.