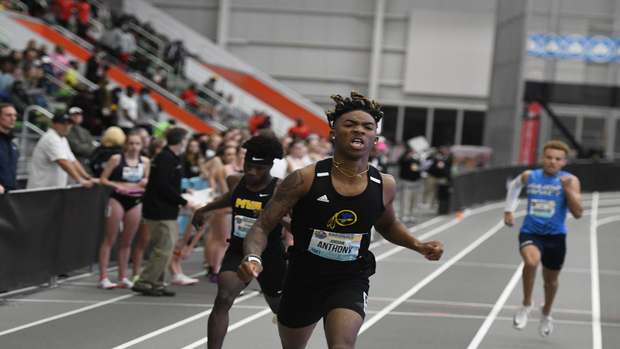 Just when we thought the Tylertown sprints star could not possibly 'wow' the United States High School Boys sprinting scene any more, he simply went out and 'wowed' us once more.

Anthony wowed us at the 2022 Last Chance Invitational in Birmingham, Ala. - 6.70 60m for the win, a U.S. #1, a Last Chance Meet Record,and a Mississippi High School Boys Indoor Track and Field record. (Watch that race below)

And now, Anthony wowed us once again at the 2022 Nike Indoor National Championships, held in Staten Island, N.Y.

At Nike Indoor Nationals, Anthony qualified for the 60m and 200m dash. At a high-caliber national meet such as this one, one has to go through rounds to make it to the finals, much like one would at the NCAA Championships or the Olympic Trials. Anthony made it through both of his prelims with ease, winning his heats and running 6.78 in the 60m, as well as an astounding 20.87 in the 200m. With that, Jordan became the first Mississippi prep to break 21 seconds in the 200m on the indoor oval.

And this was just the prelims...

Anthony, the 2021 Nike Outdoor Nationals in the 100m dash, was there to show the U.S. the true meaning of 'Sip Speed', and that meant not just snagging one, but two indoor national titles.

In the 60m dash, Anthony popped out of the blocks and drove away from the field, taking the win in a 6.69... made it look easy. Next up was the 200m, and Anthony was already coming off of plenty of momentum coming off of his prelim. Anthony had the fastest 200m time coming out of prelims by a full half of a second, and now had two national titles in the sprints in his name going into the final.

You could say he was the favorite.

Anthony burst out of the blocks and wasted no time getting to the drive phase, already having a noticeable lead coming out of the first banked turn. Coming down the back straight, he was in full force, and was looking smooth doing it. With less than 50m to go, the crowd knew it was going to be something special.

Anthony lunged for the lean, stopping the clock at 20.64... The #3 time in Mississippi High School Boys history in the indoor 200m.

Let's throw some stats on that phenomenal time:

#3 slots him in between the World Champion and Olympic Medalist Noah Lyles and four-time NCAA Champion Xavier Carter.

Anthony's time of 20.65 would have gotten him into the 2022 NCAA Division 1 National Championship this year.

Finally, that time puts Anthony at #24 All-time on the World Youth Rankings. (This is unofficial, as they did not have Slade's or Lyles's 200m performance on the list, and was factored in)

And with that historical performance, Jordan Anthony's high school indoor track and field career is officially over. However, Anthony isn't done chasing records just yet.

Expect him to chase records once again this outdoor season, and don't be surprised if snags a couple of U.S. All-time #1's.

Read about other Mississippi preps at Nationals on Next Page >>>