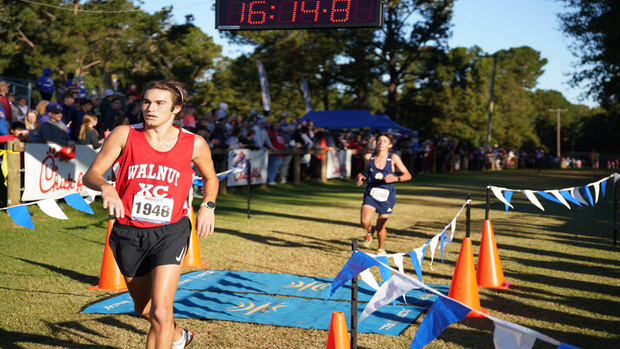 Walnut's Gabe McElwain comes into this race with the fastest seed time of 16:13, which he ran at Watson placing 9th overall in the gold division race. McElwain came into this season with a personal record of 18:01; he has shaved his PR over 2 and a half minutes since. He also won the MHSAA Region 1-2A meet with a time of 17:18. McElwain is coming into this race with a lot of momentum, looking to dominate the individual field.

Eupora's John Thomas Frank ran his personal best at Watson this season with a time of 17:51, placing third overall in the blue division race. Frank has two race wins under his belt this season, one at Eagle Claw Invitational and the other at the MHSAA Region 2-2A meet. On top of this, he has also placed consistently high in all of the races he has competed in this season. Overall, Frank has the potential to drop some serious time at the state meet.

East Union's John Evins placed second overall at the MHSAA Region 1-2A meet, running a personal best there with a time of 18:08.00 to open up the championship season. Evins has shaved over 20 seconds off of his PR from last year and has a lot of momentum heading into this race. Evins could contend with Euproa's John Thomas Frank, which could make for an interesting competition! West Lincoln's Chase Spring has had a very competitive, loaded season. Spring has placed high in a lot of the meets he has run in this season, running a season-best at the Jesse Owens Classic in Alabama with a time of 18:08.49 (just milliseconds behind East Union's John Evins). He has also won the MHSAA 2A-6 race with a time of 18:18. Spring has been on the edge of breaking his PR all season; with competition to push him at the state race, he can become a dangerous underdog.

Another key matchup to look forward to in this race will be Walnut's Kaden Braddock (18:15) and Trenton Braddock (18:17) against East Union's Gabe Rakstraw (18:18). These three runners will be chasing right behind East Union's John Evins and West Lincoln's Chase Spring; they are definitely not out of the mix for the podium finish. Look out for the big chaser group in this race this Saturday!

In the team's race, Walnut is coming in with a very strong seed score of 31, putting them in a comfortable position for first place. However, there will be a very good race for that second-place team finish between New Site and East union, where there is only a 16 point difference between the two teams. New Site is seeded second overall with a score of 118 while East Union is seeded third overall with a score of 134. This team's race for second is going to come down to how other runners from other teams will score who are not in contention for the podium finish. After the race is over, the results could make this a close finish between these two teams!