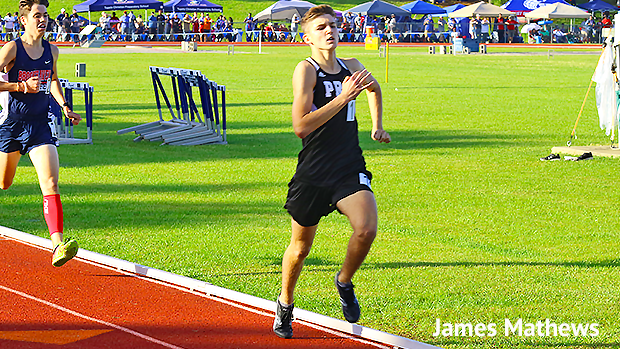 Perhaps Cole Benoit's, Pearl River, best known performance is last spring's double win in the 1600m and 3200m at the Mississippi State Track and Field Championships. Now a senior, he's one of the favorites to win Saturday's cross country championships at Choctaw Trails. He's come a long way since his first race, a 5k charity where even the power walkers started out ahead of him. We talked this week about how he gets ready for races and what keeps him busy (besides running and playing goalie for his school's varsity soccer team), and what younger runners need to do to get to the next level.

[Editor's note: This interview was lightly edited and condensed]

What's your goal for Saturday?

People always ask me what time I want to run or what place I want to get. Honestly I just want to run my race. If you go into a race thinking about everyone else running you're not going be focused on yourself and your race.

For this week I guess I am chasing a time. Technically, it says I'm leading the state in the 5K, but that time (15:43) was on a short course so it kind of makes me look like I'm leading the state, but I'm really not. Brock Kelly, Tupelo Christian is really leading the state with his 16:11, so if I could run faster than that I'd be happy. My best time is a 16:25 so it's not going to be easy but that's something I want to push for. Anything can happen at state.

I just zone out. I'll go to Pandora and put on the same instrumental music station I listen to when I study and just put on my earphones on the bus and won't talk to anyone. I just want to relax, so going to the race I'm normally just chilling and not trying to get too pumped up. Once we get to the race, I'll start talking a little to my teammates, do a few key stretches, but pretty much chill some more until it's time to start warming up. Then it hits me and I snap out of the zone. When they start calling us to the line, I'll go by myself, sit down and pray, and from that point on just focus on the race.

What got you into running?

I have to say it was my sister who brought me into running. It was the summer after eighth grade and I'd never run a race before, but my sister said there was a 5K in Hattiesburg where she lives and asked if I wanted to run it. We were literally signing up and putting on our bibs as they were shouting out instructions before the race was about to start. There were a couple hundred runners and we started way in the back. I remember that there was even a lady with a stroller ahead of us. Once the race started, my sister was walking, but I wanted to go. So I just went and started running. That feeling of running, catching up to people, and passing someone - that really sparked a fire in me. I don't even remember if I saw my time, but the next one I ran in I ran 21:21 and from there I just kept going out and doing more.

What advice do you have for younger runners?

Running takes time. Don't get frustrated. It's not a sport that you can just hop into and be good at. When it comes to running you have to put in that time and work. You're not going to get results by sitting around at home so summer training is one of the biggest things that will get you to that next level. If you really want to to get better you have to be able to put in that time during the off season.

What would people be surprised to learn about you?

I remember a news reporter came out to our school and thought it was so crazy that I did my training in a parking lot. I was the first person in my school to win a state title so it was treated as a big deal. So the reporter came out after to do a story and sees me running around my parking lot and jumping over potholes during my training run. It wasn't a big deal to me, but he couldn't believe it. We don't have a track so we run in the parking lot, but to me it's no big deal.

What keeps you busy when you're not running?

I'm really involved in school. I'm the president of two clubs, the National Honor Society and a math club called Mu Alpha Data. For that one there's a big math convention at the University of Southern Mississippi where they put on a math competition. We all take a test and complete against other clubs. I've been involved in a lot of other clubs too like the Student Council all throughout high school. I think kids say they don't like school but they're just not involved enough. If you're going to school just to go to class then you're not going to like it. I think that's why I like going so much.