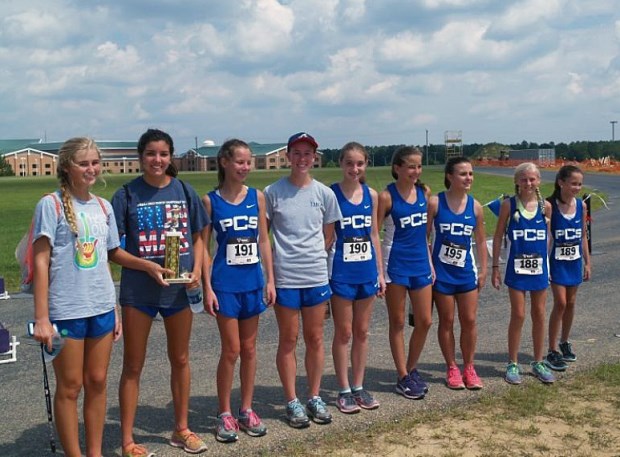 The Oak Grove Cross Country team hosted its inaugural OGXC Classic this past Saturday, August 16. Schools that were featured in the run included D’Iberville, Pearl River Central, PCS, St. Martin, and host Oak Grove. The classic served as a preseason race so runners from all five schools could get tuned up for the 2014 campaign. Instead of running traditional 5k’s, the 140 competitors ran just 2 mile races. The PCS Bobcats swept the event, winning in both the girls and boys divisions, while the Oak Grove Warriors finished second in both.

Haley Green of D’Iberville High School topped the girls event, winning with a time of 12:54. The PCS junior-senior duo of Ramsay Stayer and Margaret Campbell finished out the podium, finishing with times of 13:36 and 13:56 respectively.

“I just kept my eye on Ramsay the whole time and made sure I was where my team needed to be in the race. I feel like as a team we did really well, I am always confident in my team and their abilities going into each and every race,” Campbell said.

The seven-time-defending-state-champion PCS Lady Bobcats finished the event in first place with 28 points, just seven points away from a perfect race of 15 points. Other PCS top ten finishers include Katie Schilling, Alicia Brown, and Shelby Phillips.

“Going from a 4k to a 5k is not going to be that big of a deal for people who are putting in the mileage at practice, but it’s gonna be a little difficult for the ones that are not.” Oak Grove sophomore and 5th place overall finisher Aubrie Ware said, “Because running is an endurance sport, you get out of it what you put into it.” The Oak Grove boys and girls are both coached by Robert Burgess, who is entering his second year.

The PCS boys scored just 22 points in the event, just seven away from the perfect race score of 15. The Bobcats swept the podium with Trace Walters winning the event, Matthew Futrell finishing second, and Jackson Benton finishing third. Benton Russell and Jacob Williams were also top ten finishers for the Bobcats, a team who has captured state championships in five of the last seven years.

Oak Grove also hosted its annual 5k fun run Saturday prior to the Classic, which included almost 100 participants. Full results of all three races can be seen on racesplitter.com and of course www.mstrackxc.com Link.